This is Max who is staying with us for a week. Let’s get acquainted. Max is not the handsomest dog in the world: he looks like something created from the game of Misfits. His skin is black, his hair is white.  His legs are too short for his sturdy body and his ears are just plain silly.

Furthermore Max is not intelligent. He can’t read Billy-Old-Dog’s signals of “ I am not interested. Just p*** off you young whipper-snapper!” He startles at many things. He nudges his bowl with his nose and jumps back as if bitten.

On our walks we pass a fallen tree, and as we approach his pace gets slower and he stops and looks intently at it as if he can discern something I can’t. Admittedly it’s a large one, but let’s face it, it doesn’t move. (We once had a dog who used to stare over my shoulder when I was watching tv which was unnerving, especially if it was Dr Who, or Morse).

The same feeling arises in me when Max goes all still and alert in the woods. As a child I read constantly in Readers Digests about dogs’ instinct for danger and their selfless and heroic acts, well, all I can say is I wouldn’t rely on Max to save me from marauders or bears, neither of which have I come across in West Wood. Fortunately.

(I have met some rather overdone partying campers who couldn’t find their way back the car park and I regularly meet a guy who resembles the chief zombie from I am Legend. He looks frightening but is a gentle soul who walks from before dawn well into the day to deal with some unspecified pain he endures. Bless him).

Max prefers another dog’s food. He ignores his own bowl and lurks meaningfully beside Bill and waits till he pauses and rushes in to devour what’s left. He is like the annoying kid who hangs about, plays no real part in the game, even sabotages it from time to time, just makes up the numbers.

But, and you knew it was coming, didn’t you, there is not an ounce of harm in Max. He doesn’t whine or meither. He is unfailingly cheerful and accepts Niamh (a committed dog botherer) putting him on a lead, walking him up and down the garden and tying him up to a rail, untying him, attaching him to another rail, teaching enforced agility over shaky boxes and sticks, instructions delivered with the sternest of voices. She has no time for dog whispering. Dog barking more like.

(I’ve just had the scariest, hairiest man come to the door with a parcel for me. This man was half bear and wore dark glasses and bad hat. He also stood too close with his little electronic ‘sign here’ thing. And did Max growl or bark at him? Did he heck? And did my senile Billydog who can’t even cock his leg to pee anymore? Yes he did. Pause for applause).

Back to Max’s array of small virtues. We have just been for a run. He is ever alert to the possibility of going out, nipping past me into the porch at every opportunity. He leaps into the back of the Land Rover despite his shortness of leg. It never looks as though the move comes easily for him, as if he might fall  back at the last moment with a frenzy of scrabbling. Sits nicely on the old carpet in the back, not panting in my ear. When we arrive he leaps out and waits for me. He has no idea he could just run off and lark about in the woods on his own, making doggy friends and sending up pheasants. We set off at a plod and run through the woods for about half an hour: it wasn’t fast or athletic. He’s got short legs and I am 54. But he scampered about and pee’ed every chance he could. He watched and followed me and thoroughly enjoyed the exercise, up and down tracks and trails and he didn’t run off (although other dogs tempted him), nor did he judge my running which was like stodgy potato. When we found our way back to the car, he jumped in and lay down, even though he could have kept going for another hour or so.

When you run in a group, or with just one other person, there is often an element of competition. Unspoken mostly but it’s there. Even when I run with John and I have no chance EVER of catching him or keeping up with him (unless he has flu or something), I am aware of making comparisons between his ability and mine. Pointless I know but I am being honest here. But when you run with a dog, he’s just pleased to be there. A dog doesn’t make you reflect on your style or pace or personal best. You just do it. Together.

We long for an affection altogether ignorant of our faults. Heaven has accorded this to us in the uncritical canine attachment.

Yes please, more of that. Maybe without the dog? 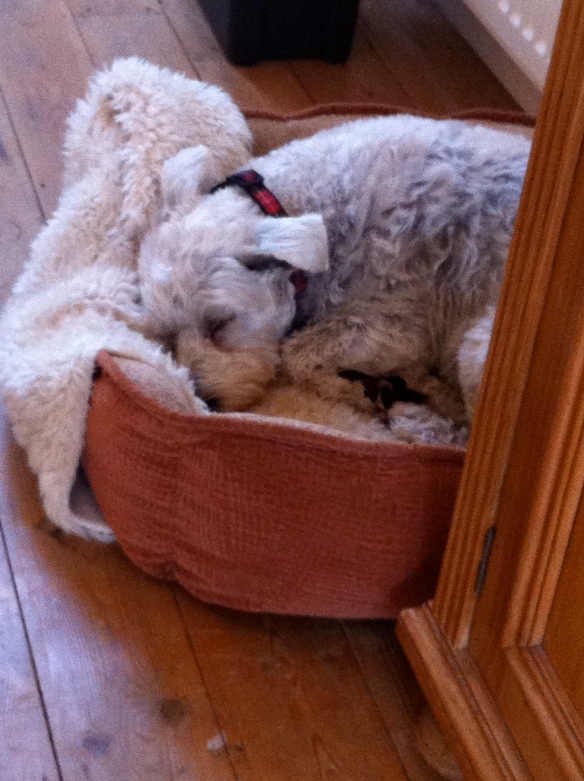